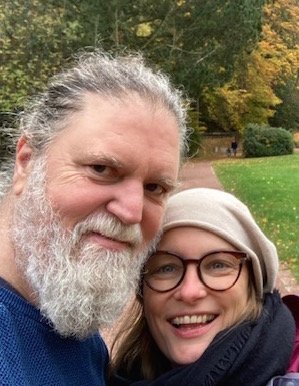 Charlie Biggs received degrees in music from the prestigious North Texas State University and the University of Southern California. Both a professional trumpet player and studio owner/sound engineer in Los Angeles for 15 years, as well as another 15 years in the Netherlands, he has worked as a sound engineer on numerous albums as well as performed on television, movie soundtracks, music videos and recordings. His credits include a Grammy award winning double platinum album with the Brian Setzer Orchestra as well as live performances on multiple MTV video awards shows, VH1 specials and numerous television shows in both the US and Europe. He has worked with other artists such as Brian Adams, Gwen Stefani, Clint Black, Rosemary Clooney, Al McKay (Earth, Wind & Fire), Linda Hopkins, Roger Williams and Maureen McGovern.
Anne Dockter-Biggs is a graduate of the Amsterdam Conservatory and a professional trombone player and composer. Her specialties include horn arranging and music producing. Living in the Netherlands for the last 20 years, her credits include working with artists such as Kovacs, Blaudzun, Candy Dulfer, Trijntje Oosterhuis, Bob Mintzer and Jamal Thomas.